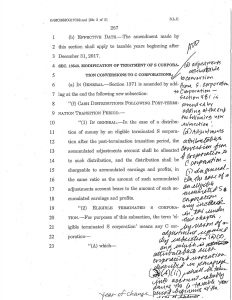 I love the GOP tax bill, and let me tell you why.
So many of the middle-class say, once passed – they will cry.
But where they see rain, I see rainbows; downside turned to up
Don’t think that it’s half-empty – instead, a half-filled cup.

I’ll save lots of money when I drop out of my college;
Might lose out on loan interest, so can’t pay for all that knowledge.
A lot of Congress-people have a higher education,
And look at all that they have done in service to our nation…

I’ll head north to Alaska once I don’t matriculate.
I hear the opportunities up there will soon be great.
I’ll be allowed to drill for oil up in the permafrost —
So what if scenic vistas and some snowy owls are lost?

“A penny saved’s a penny earned,” so say financial pundits.
And, for at least a couple years, more taxes are refunded.
Except, of course, for state and local paid; may go away.
These cuts are temporary? Topic for another day.

I see there are incentives for those owning private jets.
No doubt a valid reason and not one filled with regrets.
Private school tuition will receive a new exemption.
Will this impact our public schools? A lib-tard’s apprehension.

Some economists express concern about the debt.
Think it’s too much now? Oh, man – you ain’t seen nothin’ yet!
But what’s another trillion bucks when, politicos expect,
Without these breaks the Koch Bros. won’t assist to re-elect.

“This plan is for the rich!” some scream. I say, “Why this complaint?”
Rich is what all hope to be, and poor they wish they ain’t.
Grassley said it isn’t fair to tax inheritance;
Those wasting it on booze and broads display such arrogance.

For those who make the median, Year One looks pretty great:
The CBO says those folks will save $812.98.
But in successive years, the cuts decrease – and then about
By 2027, may not have as much to flout.

The poor may pay more taxes, but it isn’t very much.
And they already benefit from welfare as a crutch.
The rich will share their savings from a money pot so ample;
It’s the “trickle-down” effect – let’s look at Kansas, for example.

Our President, the GOP – they love the middle-class.
Or so they claim — and call those disagreeing names so crass.
Once passed — emboldened: confident they’ll win mid-term campaigns.
They strut around tumescent now (and Roy Moore — much the same).

The tax code is so complex; a political morass.
But Trump’s got his hands on it like a teenage beauty’s ass.
“Costing me a fortune,” he proclaims that’s what the fact is.
Which is difficult to prove since he will not release his taxes.