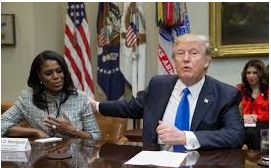 ‘Twas two weeks before Christmas, and toward Trump family sleeping —

He told her the choice was resign or be fired;

In too many contretemps she’d become mired.

Her title was lengthy, much too long to print here,

And for it she earned nearly $180K per year.

But as the year ends, her career is in ruins.

She didn’t take kindly to what Kelly told her

And so she attempted to try something bolder.

She cursed at the Chief of Staff, used language vulgar;

She claimed she “knew things” and could be a divulger;

Contacted Ivanka and begged for assistance;

Dragged out by security, offering resistance.

And then, career ended ignominiously,

She showed up, as one would expect, on TV.

After one chat, hoping the world would capiche her,

The host instead signed off with this: “Bye, Felicia!”

Despite how she grandly signed her name as “Honorable.”

She’s known Trump for years, staying close to his orbit.

But this firing – gonna take time to absorb it.

But her options are few since they axed “The Apprentice.”

She used the White House for her wedding pix background,

But now has lost access, so won’t be around.

Is no longer a “star” — just an unemployed human.