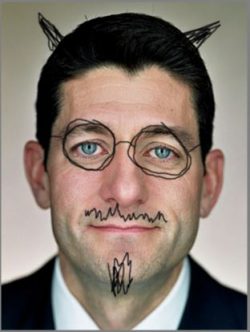 The House made a boo-boo, and had to re-vote.
Regardless, Paul Ryan decided to gloat.
He went on the TV shows, beaming with pride
While pushing all questions of fairness aside.

“How do you know in ten years you’ll renew
The breaks for the middle-class?” (Of which there are few.)
“Two-thirds of the country says this plan sucks ass.”
But nevertheless – it went on to pass.

“Are you saying this plan will be deficit-neutral?”
He wasn’t quite sure; something he’d have to Google.
“The future,” said Ryan, “I cannot predict.”
(Except for the endless North Korean conflict.)

When asked if he lived in a “fantasy world,”
(While mortgage apps dropped as the law was unfurled)
Paul Ryan denied that, and hastened to add
That all of the CEOs now were so glad.

“More workers, more factories, more money, more wages —
This tax legislation is one for the ages!”
However, when biz men were asked to show hands,
They said paying dividends led all their plans.

“The average American,” the pols like to say —
As if they’re displayed in a zoo, far away.
$174K is a Congressman’s salary;
No wonder they don’t give a shit about you and me.