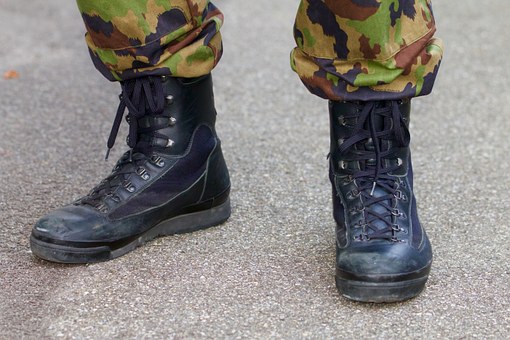 That John Philip Sousa – he wrote some great marches!
I’d step right along if it weren’t for my arches.
If not for my bone spurs, I’d wear combat boots.
But as I received those deferments – it’s moot.

Since I’m the Commander-in-Chief, I would like
To march all of our armed forces right down the pike.
With tanks and with missiles and soldiers resplendent,
To show off my stature to all my dependents.

I saw a parade back when I was in France;
I was so impressed, I almost peed my pants.
The French military marched just for Macron –
I saw Jerry Lewis with epaulets on!

In Paris, they stroll down the Champs-Elysées,
Blow kisses, and give ammunition away.
I’d like to see something like that in DC,
But bigger and better, of course, it must be.

How ‘bout a howitzer, or B-52?
A dozen or so helicopters will do.
You want a stealth bomber? ‘Cause I’ve got the pull.
But you might not see it – they’re invisible.

I want to show all of the countries on Earth
Our strength in the world exceeds even my girth.
I might have them demonstrate, with great aplomb,
What happens when you drop a nuclear bomb.

Some say this is wasteful and so ostentatious,
But none of those people are in my good graces.
This isn’t for me – it’s for those in the service!
I’m not sure why this display makes people nervous.

My critics seem fearful, with all this firepower,
I’d stage a big junta in under an hour.
Line up all my enemies for execution
And finally conclude the Trump Revolution.

But I wouldn’t do that, and you can believe me.
Before that could happen, Mike Pence would relieve me.
I’ll take all precautions so nothing big blows up –
Then act all dumbfounded when Vlad Putin shows up.

One thought on “Bone Spur of the Moment”