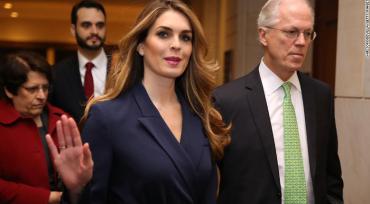 Some interest in me the from Intel Committee, as part of their ongoing query.
They drilled me regarding a statement which I helped compose.
They asked and they asked about my time with Trump, but those questions so quickly grew weary.
Who said what at that tower meeting? I would not expose.

We sat and we faced off for nine hours straight. Oy vey! Such a rough, brutal sesh.
But something I said made the headlines on all of the news.
With youth as advantage, I wasn’t worn down. In fact, I came out looking fresh.
An admission of “white lies,” at times: left for them to peruse.

And then, the next day, quite a bombshell released – when I said I’m going to leave
And search for employment considered somewhat less political.
Aligned for so long at the President’s side, a bond some said would never cleave;
Surprised I was willing to sever that long cord umbilical.

The word that most often is rendered in print to describe me has surely been “cypher.”
My personal thoughts and opinions I try to keep muted.
I might have been pigeon-holed, rightly or not, in a role as a Trump family “lifer.”
There’s got to be something out there for which I’m better-suited.

I’ll take some “me time”: drink some wine, do some yoga, and spend a few weeks decompressing.
Just hang out with my boyfriend Rob at his place, on the futon.
He’s out of work also. That’s got to be tough –  must upset him as well, I am guessing.
My friend Kellyanne reassures me he won’t get his brute on.

What’s next for me? I am not sure, but there’s one thing about which I am very certain:
A “Celebrity Big Brother” guest shot just would not appeal.
As always, discretion is key and I won’t mention happenings behind the curtain –
Unless, of course, contracts are signed for a great big book deal.