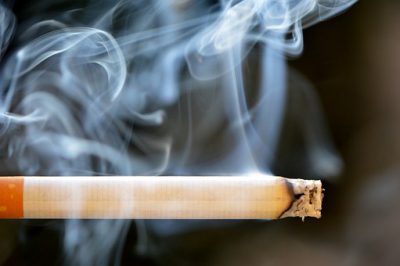 Our son Josh arrived for a visit during the last holiday season with a bag full of dirty laundry but nothing else resembling gifts. “Did you leave your other satchel on the train?” I asked him. He shook his head no, but informed us he had a very special present for us this time — he was giving up smoking.

This came as welcome news; my wife is a long-since reformed smoker, I have never smoked, and it’s always been a concern of ours that he took up with cigarettes. “That’s wonderful, son,” I responded. “What prompted you to quit?” He told us he was doing so because he was broke and couldn’t afford another pack.

It now seemed as though the core issue was less about smoking cessation and more about income cessation. But his finances are a topic for another day. Regardless of the motivation, we were pleased by his decision. “What’s your strategy for quitting?” I inquired. “Medication? Hypnosis? Vaping, which so far as I know is exactly the same thing as smoking except for the smell?” He informed us he was going cold turkey. I told him I admired this challenging approach, encouraging him to let us know what we could do to help. He responded by asking if we could fix him a cold turkey sandwich. With some chips. And a bowl of tomato soup. And maybe grill the sandwich.

While responding to this request, I quickly calculated this food-based approach to weaning him from his addiction was going to cost me more than he ever spent on ciggies, so I suggested he instead try nicotine gum and offered to front his first week’s supply. He accepted my offer, so after fixing him a follow-up ham and swiss on rye with a side of potato salad I drove to the drug store to make my purchase.

Now, as I mentioned up top — I’ve never smoked, so have no idea how much cigarettes cost. My only experience with purchasing them came when I was a youngster and would troop into the grocery store with my father, who would routinely buy two cartons of Kents every Christmas and birthday for my aunt Ruth, his older sister. He’d wrap the packages; she’d unwrap them and always feign surprise at the gift. Back then, a carton of smokes cost around three dollars (adjusted for inflation, roughly the equivalent of $15-$16 today). Josh told me he pays over ten dollars a pack after the sales and other taxes assessed in Boston, where he lives, are applied. He’s not a heavy smoker, copping only to a pack or so a week. He seems to burn through them at a higher rate when he comes for a visit, but perhaps that’s his way of dealing with the stress from his parents’ constant admonitions regarding his nasty habit.

Anyway — I share the math above because, as I learned at the drug store, the nicotine gum is not a cheaper alternative. The cost of one piece of gum and one cigarette, depending on the brand of each, is roughly the same. No doubt the manufacturers had a very easy time coming up with the price of their product: “We have an addicted population that is already spending an inordinate amount for multiple fixes every day, so why should we sell our ‘cure’ for any less?” God bless our capitalist system.

My wife has a relative who quit smoking after (this may not come as a shock) developing lung cancer. He’s survived two bouts of the disease (and, to his credit, did not take up smoking again in-between occurrences), and has made other lifestyle choices to aid in his long-term recovery. He shocked us during a recent visit by telling us he used to smoke four packs A DAY; he’d finish one and immediately light the next, from the moment he got up in the morning until he went to bed at night. The only time I was ever that busy with my hands was shortly after the onset of puberty, when… umm, let’s just say — I stumbled upon an alternate and almost-as-addictive method of stimulating my brain’s pleasure centers.

I brought home the gum and Josh began chewing tablets between sandwiches. Before leaving to go home, he said he was feeling better without smoking and had even begun to taper down on the number of pieces he required each day to deal with his cravings. His mom and I were very pleased with this news and offered him our well-wishes for a complete and successful withdrawal.

Fast-forward two months from that visit, when Josh called us one day to say a quick hello during a break at work. As we chatted about what was new in our respective households, we overheard a muffled voice entering the conversation. “Who was that?” my wife asked. “Oh, just someone bumming a cigarette from me,” he replied. We were disheartened to realize the attempt to quit hadn’t taken, but kept our opinion to ourselves this time. Our son is an adult, responsible for his own choices, with the apron strings severed long ago.

But I’ll be damned if I’m going to let that turkey eat his way through three pounds of cold cuts the next time he visits for a weekend. Chew on that, sonny boy.