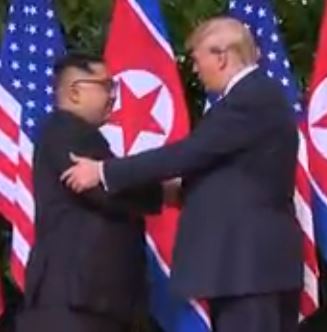 That whole G-7 temper tantrum? Clearly was a ruse —
Intended to convey my pique and dominate the news.
I wanted Kim Jong-un to think I was a bad-ass Prez
So when we got to Singapore, he’d do just as I says.

They all laughed when I said, “My touch, my feel — that’s what I do.”
(Referring to negotiations — not about #MeToo.)
I said I’d size up Kim Jong-un within a New York minute:
Decide if I would take a stroll, or if he was all in it.

To all the haters out there, and you know that I have many,
The day before: your insults flew. Today: you don’t have any.
The world is waking up to learn I’ve made my greatest deal,
The details for a later time. Right now — the big reveal.

They said I blew off experts, all their insights I’d resist:
Forgetting that I had an uncle who’s a physicist.
When I was just a young man he explained it all to me,
And shared a bunch of wisdom about nukes and weaponry.

I knew the North Koreans were preparing to concede.
I’ll tell you more about it if you check my Twitter feed.
The sanctions were important; pressure brought by what they lack.
You know who knows from pressure? Larry Kudlow (heart attack).

I said we’ll give up sanctions once the nukes are not a factor;
They’ll flip a switch to turn off every nuclear reactor.
Kim promised to destroy a missile engine testing site,
And I said, “For a dictator — this Kim Jong-un’s alright!”

I told him we would figure out a way to stop the war games.
I promised I would flatter, and not call him any more names.
I didn’t give up anything to get his signatory,
And midterm candidates will bask in my reflected glory.

Kim Jong-un and I have got a very special bond.
I flattered him in later days and boy, did he respond.
Right now I’ll take my victory lap; the world’s man of the hour,
And soon begin construction of the Trump Pyongyang Tower.