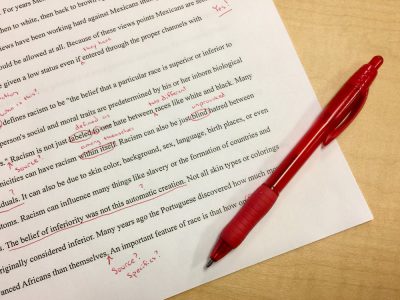 Today we will investigate one of the dark caverns of the grammatical underworld — diacritical marks.

First of all, let’s define the word diacritical. This is what happens when your mother, on her deathbed, uses her last breath to tell you what a disappointment you’ve been to her your entire life.

Another word for a diacritical mark is a glyph. A glyph is an unpronounceable word, since it contains no vowels. Vowels are the letters a, e, i, oh no, yoo-hoo and, sometimes, y. This, however, is not one of those times.

There are few words native to the English language requiring diacriticals. Most of the words that do and are now part of our everyday speech have been imported from other countries, often without a tariff assessed and therefore leading to the current trade war. Perhaps the best-known example to illustrate this is piña colada, with the little wiggly bugger over the “n” called a tilde (which is pronounced “TILL-day,” as in, “I’m going to drink piña coladas all through the night and tilde-light comes.”).

Another diacritical is the umlaut, which has its origins in Germanic languages. (Have you ever noticed how animated German people are when speaking? That’s because theirs is a -manic language.) In English, however, it is often confused with its identical twin, the diaeresis. The diaeresis is found only when discussing the Brontë sisters (which no one ever does), or when reading articles in The New Yorker magazine. The New Yorker (yes, The New Yorker) is also notorious for doubling down on a consonant before a suffix, such as in “focussed” and “traveller.” I, personally, double down only when I’m holding an ace and the dealer draws a bust card. Anyway — during a recent vacation, I suffered from a bout of traveller’s diaeresis, but a few swigs of Maälox took care of it.

And then there are the accents: acute and grave. An acute accent is like the one the character Fez used in the sitcom That 70’s Show. A grave accent is adoptted by Meryl Streep in every movie for which she wins Best Actress.

Finally, let’s review use of the cedilla, which is a hook or tail affixed underneath certain letters. Soupçon is a good example here: when I was a youngster, my mother would call out “Soupçon!” when lunch was ready. By the time I reached the table, everyone else would already have a heaping serving and all that remained for me were a few brothy spoonfuls, containing neither chicken nor stars. I would burst into tears and my mother would console me by saying, “You are destined to be a disappointment to me your entire life.”

Well, at the risk of disappointing you, dear reader – I’ll bring this to a close. Keep your eyes open for our next topic of discussion: Editing While Intoxicated, or 80-Proofreading.

5 thoughts on “A Bad Case of Subjunctivitis”