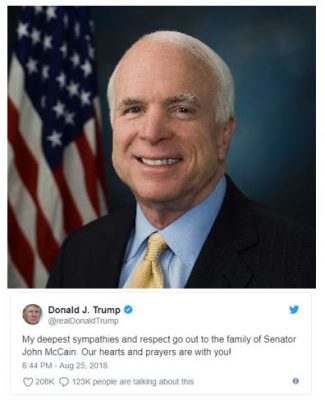 In response to McCain tweet, the press vilified me –
Now that’s he’s dead, he’s the subject of rapture.
But I prefer heroes who don’t criticize me.
(You already know how I feel about capture.)

He famously gave a thumbs-down late one evening,
Thwarting my efforts to vanquish Obamacare.
From that point on, my contempt for him seething.
(Got to admit, there’s was sure lots of drama there.)

Rather than offer a plaudit effusive,
I nix’d a statement and posted a tweet instead.
Damning with faint praise, the words I made use of.
(Almost expressing relief hearing he was dead.)

Those who aren’t for me are then thought to be against;
I have few friends, but acquired many enemies.
Those who disparage are sure to get me incensed.
(Mostly around campaign irregularities.)

One time McCain called me “half-baked” and “spurious,”
Claiming my actions were unpatriotic.
Questioned my friendship with Putin as curious.
(As if it’s wrong to be thought as despotic.)

Flag atop White House: flies full, two days later.
Normally stays at half-staff until burial.
That was enough time to honor that hater.
(Why kiss up now, when it’s been adversarial?)

Death of McCain brings an end to bipartisan –
Cooperation becomes an abstraction.
Now strictly one camp or other your heart is in.
(Assuming you’ve got one – mine’s missing in action.)