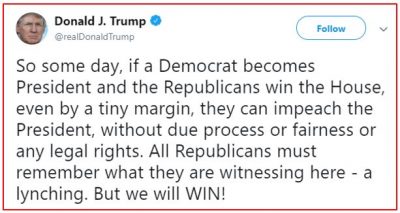 I’m being lynched, as you can see,
Right here in Washington, DC;
Hung from a legislative limb.
My choice of language here: quite grim.

As charges have around me sprung up,
Dems believe I should be strung up.
My stance – which you all can trust – is
This is vigilante justice.

The Angry Dems have formed a mob.
The voters’ will they wish to rob
Through use of metaphoric noose.
(I’m blind to its historic use.)

Now, in my latest Twitter riff,
I claim I’m stripped of rights – as if
My tale of woe belongs among
The stories of those who were hung.

I launch yet one more vile harangue
Demeaning those who once were hanged
Because of justice then denied.
(A stretch, I know – at least I tried.)

I seem incapable of grasping
How my language leaves folks gasping.
It seems I have a great proclivity
For racial insensitivity.

Lindsey Graham – such a sport;
He used the same word in support
And did not wield a synonym.
I found that mighty white of him.

I’ve said to blacks (you’ve seen the news):
“Just what the hell you got to lose?”
This tweet removes the mystery –
I’m annexing your history.