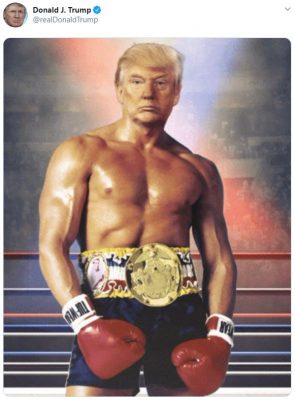 I tweeted out a picture of a big star you know best. Were
You surprised at all to learn it was a fake; I’d photoshopped it?
I don’t look much like a boxer; my physique says: “Sumo wrestler.”
But I took a picture of Stallone, and then just merely cropped it.

There wasn’t any caption with the photo that was doctored
(And to hear my campaign tell it, there is nothing that’s been altered).
Still, the image was unsettling, and also a bit awkward,
Since at my age muscle mass begins to show signs that it’s faltered.

Let me clearly state the image that I’m hoping for is toughness;
Perhaps a bit ironic that my model here is fictional.
And while it’s clear I do not have a six-pack in the buff, this
Doesn’t mean it should be viewed as an inaccurate depiction, still.

Rocky came from nothing; he’s the typical palooka.
(My start’s also humble – just a small loan from my Pops.) Yet
Rocky beat the odds and triumphed; won the title – not a fluke. A
Rags-to-riches kind of story (although mine has much more flop sweat).

Rocky had but one true love who served as inspiration.
In this respect, I’m less like him and more like Sly Stallone.
Is that unclear? Then let me say by way of explanation:
We both have had a bunch of wives, and rarely lived alone.

But overall – Balboa’s life for mine is quite a synonym:
We’ve fought our ways through battles, after having been thought once sunk.
To beat up my opponents is what drives me, and has driven him.
And, frankly, when you hear us speak – we both sound like we’re punch-drunk.