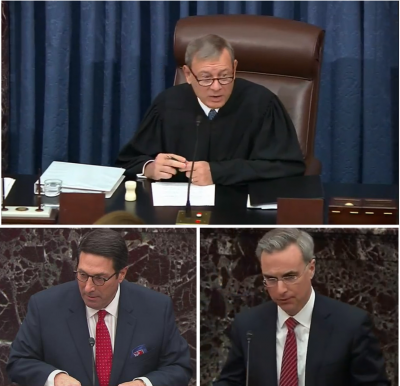 My attorneys are presenting a most vigorous defense:
It will be devoid of facts – just as I like it.
With the outcome predetermined, there won’t be too much suspense:
Run our ball into the end zone and then spike it.

Now, perhaps there is a glimmer of a shadow of a chance
That this trial may introduce some brand-new evidence.
But, so far, all the Republicans make clear they look askance
At the motions that require their benevolence.

With Jay Sekulow bombastic, even more than Cipollone,
It’s quite clear that they were staging a performance.
They were playing to an audience of me, the one and only.
And I don’t want civil discourse – I want war chants.

Now, the seven from the House who are entrusted with the mission
To present the case supporting my removal,
Face an uphill battle since McConnell’s taken the position
That a search for truth meets with his disapproval.

Justice Roberts is presiding, and he shut down verbal flogging
By presenters who staged equally absurd scenes.
He admonished both sides sternly to refrain from “pettifogging.”
I agree! (Although I don’t know what that word means.)

In my final day at Davos, I continued my assertion
That the Democrats’ behavior is disgraceful.
But if four (at least) Republicans concur on a desertion…
While I don’t like humble pie – I risk a face full.