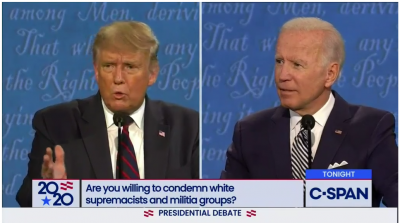 I steamrolled Joe Biden and flattened him good;
a true force of nature, could not be withstood.
I won the debate with my fury and bluster –
and yet critics called it a fuck that is cluster.

I crushed, overwhelmed, inundated, and thrashed him.
If I’d had a pocket knife, I might have slashed him.
I waged war against the debate’s moderator,
and even trashed Hillary. (God, how I hate her.)

I vented, insulted, misled, obfuscated,
with paragraphs that could not be conjugated.
I cut off, disrupted, usurped and intruded
which kept Joe and Chris Wallace largely excluded.

Joe mentioned his son, Beau, and called him a patriot;
here’s how I responded (I know you might hate me, but):
I went after Hunter, whose failings are writ large,
accusing him of a dishonorable discharge.

I spent all my time launching vicious attacks,
and offered up fanciful wishes for Blacks
while suggesting that suburbs would soon disappear.
(My approach to the pandemic seemed cavalier.)

I trampled Joe – yet I woke up to instead find
Trump Boosts White Supremacy: this morning’s headline.
The radical Left (others, too) made a loud noise,
since I gave an overt command to the Proud Boys.

“Stand back and stand by” are the words that I uttered;
Joe Biden was so shocked, he quite nearly stuttered.
When given a chance to denounce white supremacy,
I chose to respond with a vapid “Well, lemme see…”

I came out too hot, and yet while I’ll admit no
remorse – I turned this debate into a shit-show.
When you’re with me, don’t ever use the word smart,
since my brains and mouth could not be further apart.