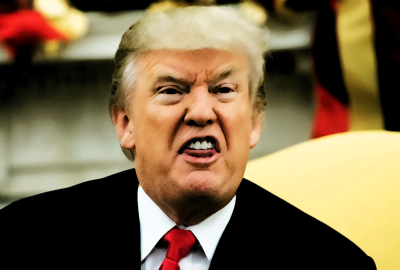 I DEMAND EQUAL TIME!!! I’ve got plenty to say.
One more sham Dem disgrace: same witch hunt, different day.
From an Unselect group; a committee that’s Pseudo;
afraid of the truths about which I and you know.

A simple protest that just got out of hand,
as I tried to usurp every law of the land
to negate the results and extend my regime.
More were there than when MLK said, “I’ve a dream.”

I do not accept blame for that Capitol surge;
‘twas the fault of Mike Pence, who was lacking in courage.
And besides – hardly any of those in the throng
issued threats, brandished guns, or did anything wrong.

We have now heard three days of intense testifying
from those close to me – every one of them’s lying.
I called Pence a “wimp,” or so one guy said he heard
(I’ve not yet denied calling Mike Pence the p-word).

Witnesses threatened, in some cases ruined,
all just because they offered proof of a coup. And
by government servants we’ve now been betrayed.
(If you donated money to me – you’ve been played.)

This Committee, comprised of left-wingers and RINOs,
is all smoke and mirrors, as both you and I know.
I put out a statement – 12 single-spaced pages –
and carefully footnoted all of my rages.

Written during the throes of a Diet Coke binge,
this philippic is proof that I’m clearly unhinged.
I rehash every claim that’s been thrown out of court,
overblown, or disproved. (Also – fuck you, Marc Short.)

I have claimed that Ivanka came close to a perjure
(I now regret backing the Trump-Kushner merger).
Having thrown my own flesh and blood under the bus
makes it clear my behavior is what’s treasonous.