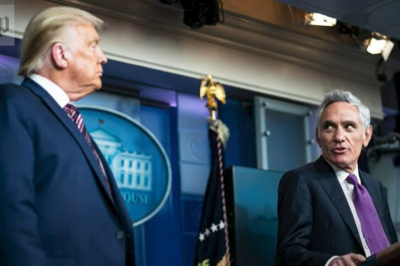 I’ve got a new virus guy in my ear purring;
it seems less with Fauci that I’m now conferring.
I don’t think as much as I once did of Birx.
This new doctor – Atlas – feeds into my quirks.

He pushes the theory that’s called herd immunity.
He says that we test way too much; nothing new to me.
He says that the science on masks ain’t definitive –
I’m glad that I now have an ally to spin it with.

No need for a test if you’re asymptomatic.
Rely on the CDC? They’re bureaucratic.
The risk to our children is hardly significant.
So, Doctor Scott Atlas – I think you’re magnificent.

You see I retweeted the death toll’s nine-thousand.
I was not specific on the whys and hows, and
I misunderstood what’s meant by “comorbidity.”
I’m questioning my own task force’s validity.

You’re my go-to doctor at this time, Scott Atlas;
with Deborah and Anthony, I think I’ll chat less.
Once more I feel free to – with Scott’s information –
promote groundless theories to mislead the nation.