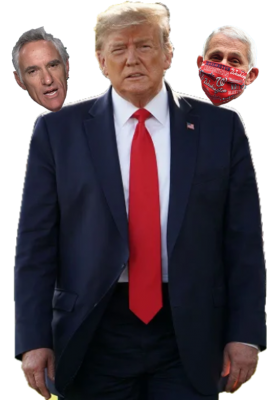 Tony Fauci is an idiot who got this virus wrong.
In the pantheon of great physicians, Tony don’t belong.
He’s a nice guy, but he’s been around for several hundred years.
If his dream is to play baseball, well… he shouldn’t switch careers.

Folks are getting tired of Covid and they think enough’s enough.
Fauci thinks that he knows better, so I’m gonna call his bluff:
he has changed his mind on masks more times than I can even count.
(It was once – but it’s the principle at stake, not the amount.)

If I’d listened to the doctor, total deaths: 800,000.
We’d be in a deep depression if I’d done what he espoused, and
every time he’s on the television, one more bomb goes off.
I should grab him by the nuts and tell him, “Turn your head and cough.”

I’ve replaced him with Scott Atlas, who’s an expert in his field –
but not epidemiology, his résumé revealed.
He campaigns for herd immunity: that means we don’t attempt
to restrict the spread of virus, and hold science in contempt.

Biden’s sleepy and he’s creepy and he’s crazy and corrupt,
and the differences between us couldn’t be thought more abrupt:
he will listen to the scientists I’ve chosen to ignore,
and will implement the measures that I should have done before.

The election’s just two weeks away, and I believe my chances
are as genuine and stable as my personal finances.
If you vote for Joseph Biden, then you’ve put your faith in medicine –
a ballot cast for me means common sense you chose to jettison.