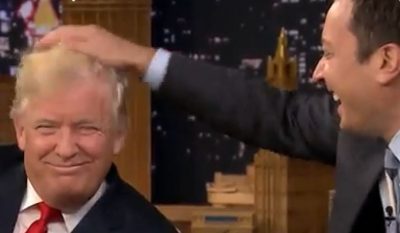 You know what the hell has gone wrong with our country? I wonder where all the comedians are.
I’m thinking about those who used to be funny: the late Johnny Carson, and Ms. Roseanne Barr.
Years ago everyone loved Burns and Allen,
But now we are stuck with that punk, Jimmy Fallon.
There’s nobody now on the late-night TV with the talent required to make them a star.

This guy on the CBS program – I hate him. What passes for “humor” on his show is crap.
I used to stay up late to watch David Letterman, but for Colbert I’ll just stick with my nap.
I’m able to laugh at my sparkling persona
(But not when McCain throws shade from Arizona).
What I find amusing is mocking reporters who don’t cite their sources, or have handicaps.

As much as the next guy, I love a good joke. When I let my hair down (pun!), I’m known to be jocular.
But any loud-mouth who shows up at my rallies to cause trouble – I’ll punch him right in the ocular.
You know who can make me guffaw? Hint: it’s Hillary.
Her feeble attempts to demean me through pillory.
It generates big laughs when crowds of supporters all chant, “Lock her up!” It’s still popular.

I like the word “tittered” for obvious reasons. I think it’s a double entendre.
I tweet unrelentingly statements amusing, the meanings of which critics ponder.
My funny bone tickled by Low IQ Maxine
Both sides criticized her for idiot waxing
While I sit and snicker and think of the lead in the midterms the Dems soon will squander.

My status as autocrat: firm — when the Red Wave prevails in the coming election.
The polls and the pundits are wrong when they claim Dems will win – you can screw their projections.
The people who think it is wrong to abort’ll
Come out strong for me, which will cause me to chortle.
And I’ll have the last laugh when all the Republicans grant what I want: genuflection.