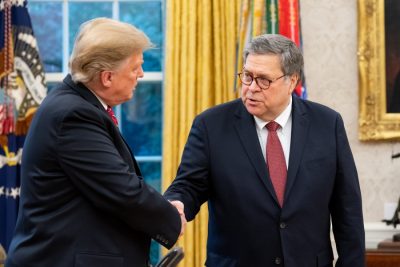 The call was perfect; broke no laws –
And yet my ask gave Bill Barr pause.
The path it took was roundabout,
And now the Fake News found it out.

I hoped Bill would exonerate,
As he has done before (he’s great!),
By holding a news conference where
He’d clearly state: “There’s no there there.”

Apparently, it’s been averred,
He would not take me at my word.
(There’s no way you’ll hear me confess one
Word of mine’s brought into question.)

I claim the DOJ has ruled
The call was good; you’ve all been fooled.
But that’s not what they said, exactly
(Skip the facts, they just distract me).

Bill Barr has been a stand-up guy;
He’s done what I’ve demanded. Why
Would he now choose to turn his back?
His loyalty – a shocking lack.

With all the passes Barr has given,
I thought once more I’d be forgiven.
When even my hand-picked A.G.
Won’t back me up – then woe is me.

2 thoughts on “Barr None”