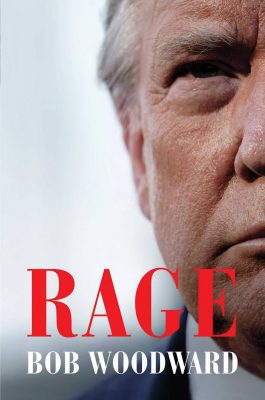 I didn’t want to cause a panic, folks – so how could that be wrong?
Instead, I took the tack, “There’s nothing to see here; please move along.”
I said the virus would soon disappear, like magic; be kaput.
But now it looks as though I’ve shot myself right in my bone-spurred foot.

I chose to play down just how bad this was and so avoid a frenzy,
which I think I then made clear by whom I put in charge: Mike Pence. He
took the lead and ran the task force, like a loyal second fiddle.
Did I ever mislead? Absolutely not. Well… just a little.

You will recall I said by April that this plague would disappear.
I told Bob Woodward that the fact is I’m a leader (comma) cheer.
I kept on reassuring parents: kids are virtually immune,
so let us open up the schools and send them back this afternoon.

I do not plan to read Bob Woodward’s book, of which the title’s “Rage,”
because the title’s a misnomer – I did nothing but assuage
all of the fears that people might have had, which I said were unfounded.
Now you’re learning that I lied, yet just for that I’m getting pounded.

Although that’s my voice on the tapes, I’ll still portray it as a hit job.
I will fiercely try to redirect – but fan has now met shit. Bob
Woodward took down Richard Nixon with the Watergate connection.
I’ve completely failed the nation. ¡Adios! to re-election.