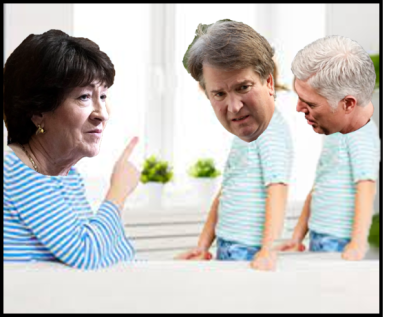 Maine’s Senator Collins was shocked and dismayed
when, by Gorsuch and Kavanaugh, seems she’d been played
since, in talks with those fellows about Roe v. Wade,
“settled law” they espoused now appears retrograde.

A draft has been leaked; it appears that each gent
had alluded to views neither one of them meant.
Testimony provided they now circumvent,
and have thrown to the curb notions of “predecent.”

The concept in law known as stare decisis –
explained in a way that is clear and concise – is
a doctrine that previous ruling suffices;
not subject to some two-faced justices’ vices.

And though Susan claims she supports right to choose
there’s a bill coming up, which she says she’ll refuse
to approve, since it doesn’t align with her views.
So, to women’s rights – seems she’ll again put the screws.