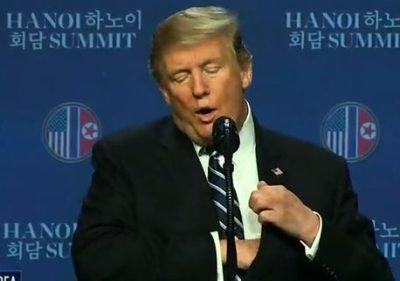 I flew halfway ’round the world so Kim and I could talk.
His promises so far not etched in stone, but scrawled in chalk.
He said, “First, lift the sanctions.” That demand led to a balk.
Sometimes you get the deal you want; sometimes you have to walk.

For decades, Kim Jong-un was thought to be a vicious kook.
I cozied up to him; thought I’d convince him to de-nuke.
I spoke of our discordance with the gentlest rebuke.
(Sidebar: Mike Cohen’s testimony made me want to puke.)

I thought at least we’d sign a declaration, fully ending
The war between the North and South (no fighting, just pretending).
But Kim Jong-un would not back down, and I was quite unbending.
That Nobel Peace Prize: something for which I won’t be contending.

Objected to reporters who asked questions I thought brash;
Their queries about Cohen: “Any possible backlash?”
Sarah Sanders tossed some of those folks out with the trash.
Hairy situation (like John Bolton’s grand moustache).

The summit ended early, without any signatory.
I went back to DC, and Kim back to his territory.
Very disappointing I had not been draped in glory.
Despite my claims of progress, once again: the same old story.

The biggest news to come from this is Kim’s fervent denial
Regarding Otto Warmbier’s death, and how I said that I’ll
Take Chairman Kim’s word that he didn’t know, and found that man’s death vile.
Why didn’t I condemn that tyrant? Folks, that’s not my style.

Round One didn’t matter much, and even less Round Two.
Third time is the charm, so maybe next time a breakthrough.
Back at home – a chance the House will take a look into
My taxes. My next summit: with Internal Revenue.