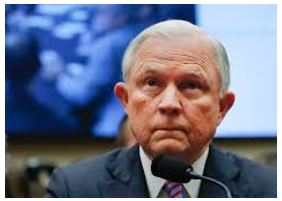 You probably already know my middle name is Beauregard.
And, based on recent statements, you may think that I have no regard
For being truthful or direct. Some pundits call it perjury.
Insinuate that I tell lies? You’ve never been to church with me.

I lead a very busy life. I meet with all the diplomats.
So much is going on that sometimes I can’t recall all the facts.
Now, as Attorney General, I’m leader of the DOJ.
I’d like to set the tone; however — Donald Trump prefers his way.

From all things Russia many months ago I said that I’d recuse,
And recently have offered, “I do not recall” as my excuse.
You think that’s perjury? You surely don’t know my mens rea.
Some say that I’m side-stepping truth. Well, buddy — that’s the whole idea.

The Democrats ask who I met and what I might have said to them,
Whereas those on the other side are focused on uranium.
Jim Jordan’s stuck on Hillary — “A special counsel!” was his cry.
But “looks like” as a legal standard? Brother Jim, that just won’t fly.

For decades, I served Alabama proudly in the U.S. Senate.
I left that job at Trump’s request — and right now, I sure do regret it.
Instead of sitting way up high, participating in the grilling,
I’m being asked to choose if teenage girls were victimized, or willing.

Instead of Strange, my open seat may go to Judge Roy Stewart Moore.
But every day, more voices claim that he’s a choice they all abhor.
A scheme is underway to get me back, perhaps by this December.
Why did I join the Trump campaign? At this point — I do not remember.